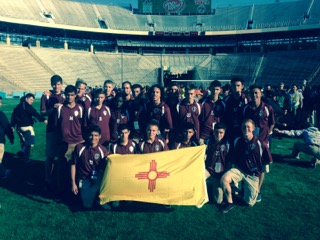 Rio Rapids SC 01 boys recently competed in the internationally renowned Dallas Cup.  While they didn’t manage to qualify for the quarterfinals, they played great matches against a top academy team from the UK, an FC Dallas youth team, and a top team from Northern California.  The boys soaked in the international culture and watched top U19 and U17 teams like Liverpool FC, Everton, River Plate, Corinthians, Tigres de Guadalajara, and many more.  Rio Rapids SC Alumni Tyler and Luke Cotter (Rio 94) gave the boys a tour of the UT Dallas campus and gave them lots of advice on what it takes to be top student athletes.  Great fun was had by all.

Rio Rapids SC 98 recorded two wins and a draw at Dallas Cup XXXVI, it was not however enough to progress to the quarter final stage of the tournament. The team won games against teams from Chicago & Dallas and played to a hard fought draw with a team from Wisconsin. It was heart breaking for the team to be eliminated on the third tie breaker goals scored, the team will leave the tournament proud of their performances with some fond memories of their participation in such a prestigious event.