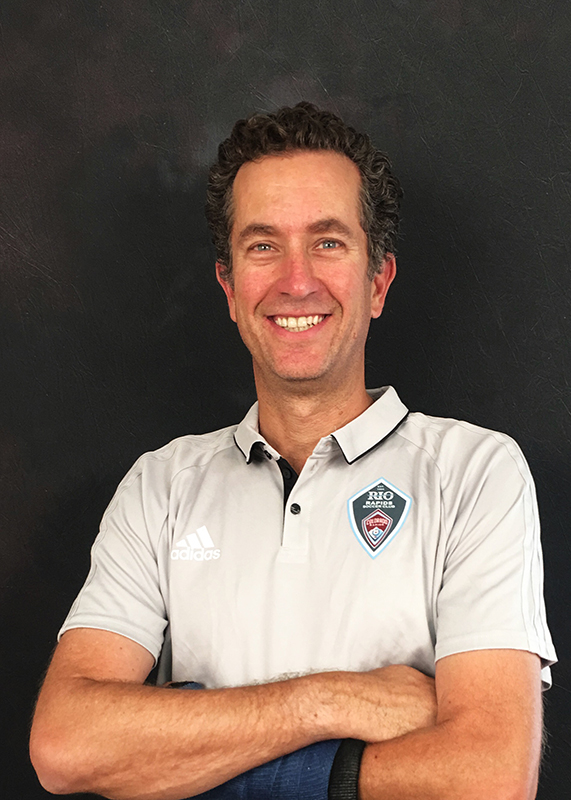 Jason Moran is the Executive Director of Rio Rapids Soccer Club. Jason runs the business side of the club, as well as coaching teams, and working on club development. Jason was born in Ft Lauderdale, Florida, but spent most of his childhood in Santa Fe, New Mexico. Jason has loved soccer since he was a young child, and feels fortunate to have been able to forge a career in it. He is passionate about working with youth, and watching how soccer helps kids develop life skills that stay with them long beyond their years on the field. He enjoys getting calls and emails from kids he’s coached through the years and hearing about their achievements.

Jason received his B.S. in Biology and his M.A. in Sports Administration both from UNM. Jason has an extensive coaching background from Club soccer to college soccer, and has worked at the State and Regional levels in US youth soccer organizations (NMYSA, South Texas YSA and ODP in Region III & IV). Some of Jason Soccer Licensure include USSF “A” and the NSCAA Premier coaching license. When Jason’s not on the field, you can find him spending time with his wife and daughters, fly fishing, or mountain biking. He also enjoys following the Miami Dolphins, Arsenal football club, and the US National teams. 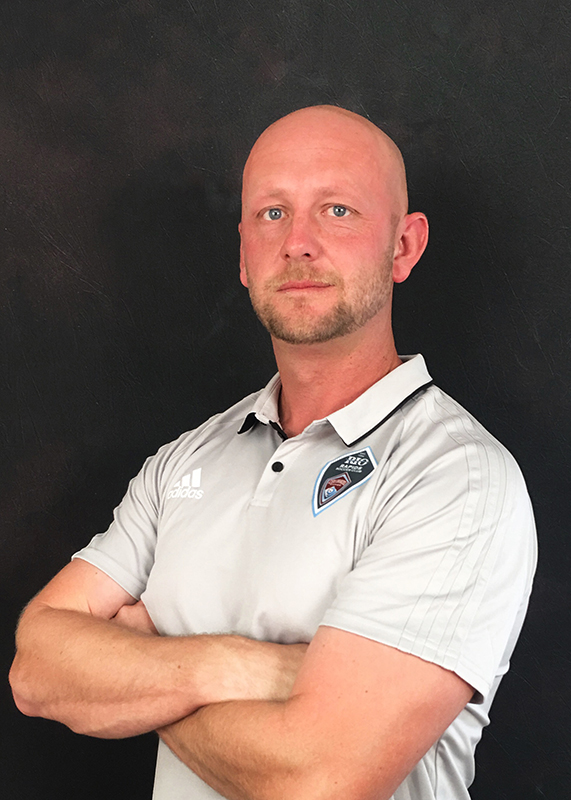 Chris Hurst is the U14-U16 Boys Director of Coaching and the Director of External Operations. Chris oversees the U14-U16 Boys teams for Rio Rapids, as well as the partnerships with other organizations throughout the Southwest. Chris grew up in Prudhoe, Northumberland in the north east of England. He moved to New Mexico in 2004 and has been working with Rio Rapids since that time, becoming a full time Director in 2006. Chris feels very fortunate to be able to share his passion for soccer with the community in New Mexico.

Chris has his B.S. in Sports & Exercise Development from the University of Sunderland in England. Some of Chris’s soccer qualifications include his USSF B License and the National Youth License. While Chris is not on the field coaching, you will find him hanging out with his wife and daughters exploring the Southwest, watching Chicago Blackhawks hockey or Denver Broncos football, playing golf, or screaming at the TV watching his beloved Sunderland play. 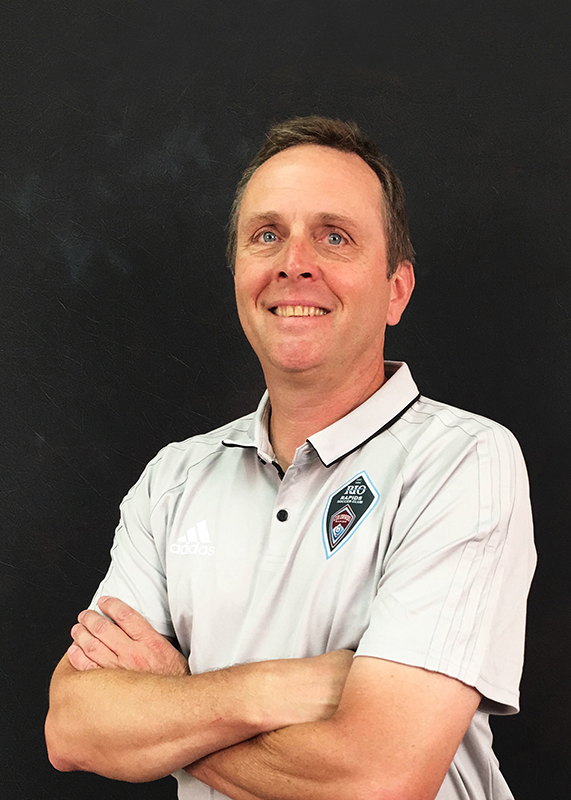 Ray Nause is the Director of Coaching Education and Development for Rio Rapids Soccer Club. In addition to his on-field responsibilities as a coach, Ray leads the Club’s programming in the areas of college search, coach education and member safety and welfare. He is especially passionate about guiding players and parents through the college search process and helping them to prepare for and find that perfect fit college. Ray has 16 years of experience as a collegiate soccer coach and athletic director. He has also worked as a member of the Region IV ODP camp staff, as a New Mexico ODP head coach and as a coach education instructor for NMYSA, NSCAA, USYSA and SAY Soccer courses.

Ray earned his B.S. in Nuclear Engineering magna cum laude from the University of Cincinnati. He also holds the U.S. Soccer A License, NSCAA Premier Diploma and USYSA National Youth License. Ray was drawn to New Mexico by the high desert climate and landscapes and the many bright sunny days. He appreciates the midwestern values he was introduced to growing up in Ohio and enjoyed the experiences he had while living in Vermont and upstate New York. In his time away from soccer, Ray cherishes opportunities to travel and experience the outdoors and you might also find him at the hard rock concerts coming through town. 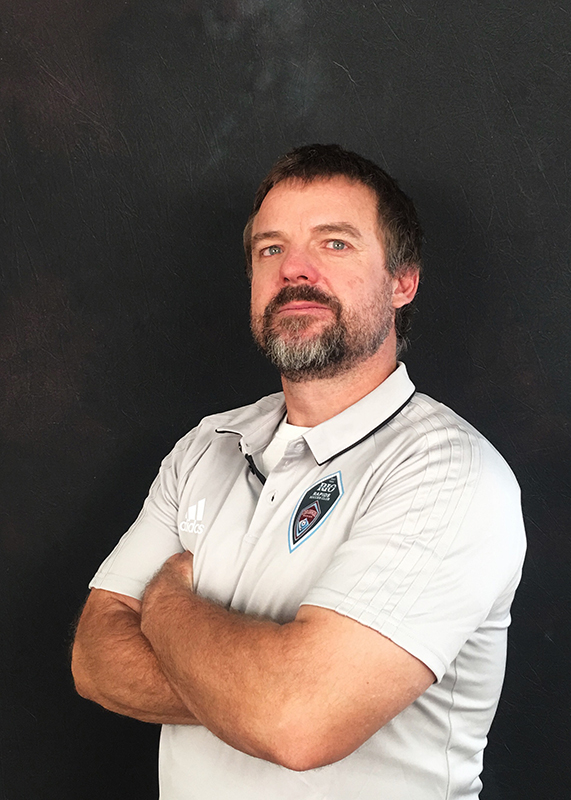 Sebhat “Sibby” Browne is the U9 thru U11 Boys Director.  When Sibby was five and six years old, his family lived in Quito, Ecuador.  In 1976, his father took him see the championship game of the Ecuadorian professional league.  The passion and energy of the packed stadium infected Sibby for life.  Since then soccer has been at the forefront of everything he’s done.  Sibby grew up mostly in the Philadelphia metro area; played club soccer for FC Delco 70; captained a Pennsylvania high school State Champion Conestoga High School (1988); and eventually played four years of varsity soccer at the University of Pennsylvania (1989-1992).  Sibby is a member of the Conestoga High School Sports Hall of Fame. When the University of Pennsylvania soccer program had it’s 100-year anniversary, the alumni players voted for All-Century and All-Decade teams.  Sibby was voted to the 1985 thru 1994 All-Decade best eleven.

“When I was about 12 years-old, I realized that the coaching I was receiving did not reflect the passion that I had for the game.  I pledged to myself then that I wouldn’t let the same thing happen to players once I was old enough to coach.  So you could say that I’ve known I was going to be a soccer coach ever since I was 12.”  He’s been coaching soccer since 1985.  After coaching several high school varsity programs on the east coast, Sibby moved to New Mexico in 2000.  He’s been working diligently since then to assist New Mexico players in achieving their soccer (and life) dreams.  Sibby has coached elite older boys teams for Rio Rapids SC over the past 15 years, winning eleven State Cup Championships with seven different teams.  Currently he’s focusing every day on running sessions for the U9 thru U12 boys and sharing his passion for the game. “If there is as much growth for Rio Rapids over the next fifteen years as there has been in the first fifteen years; the environment for player development in New Mexico will be transformed again.” 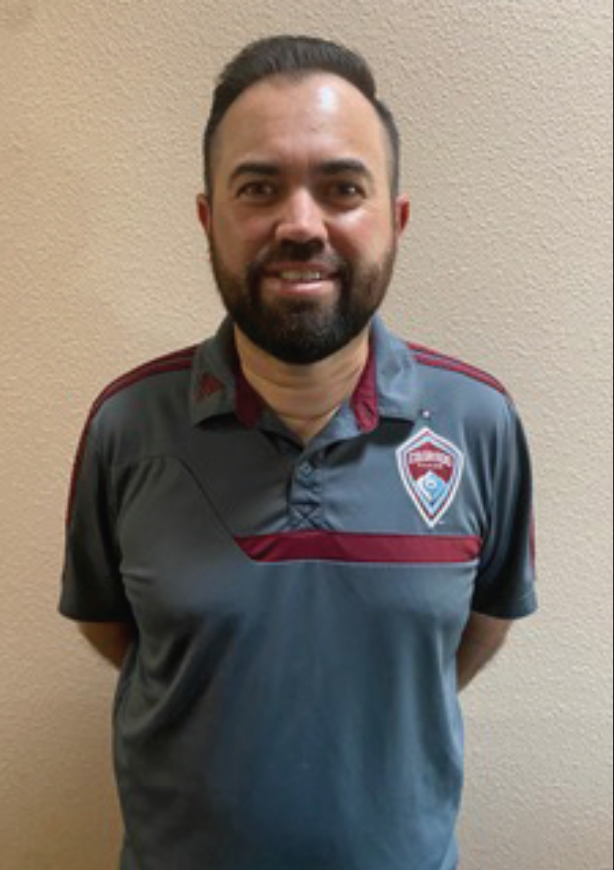 David has returned to the Rio Rapids Soccer Club as the U13 – U15 Boys Director of Coaching. David will oversee the U13-U15 Boys teams and help develop coaches and players within the age group. He was born raised in the Albuquerque area. After graduating from St. Pius X High School in 2002 his coaching career started. He is entering his 18th year coaching at the high school level. He has been part of nine state championship teams, several of which were nationally ranked. In 2014, he started working with the Albuquerque Sol as the Director of Game Day Operations. In 2019 he was also General Manager and Associate Technical Director for the newly formed Albuquerque FC. Albuquerque FC competed in the WPSL, which is the highest armature level women’s soccer program. He ended his tenure with the Albuquerque Sol and Albuquerque FC in 2019 as the General Manger. In 2015 – 2017 David formed NM College ID Camps, LLC, in which he flew college coaches out to work with NM athletes.

In 2013 and 2014 he was named the National Soccer Coaches Association of America (NSCAA) West Region Assistant Coach of the Year. He has his USSF D License and is planning his C in the 2021. David also holds his Premier Diploma from the United Soccer Coaches, formally NSCAA. In February 2019 he earned his BSc in Coaching Performance in Football from Anglia Ruskin University in Cambridge, England.

Right after High School David realized that coaching soccer was a perfect job to get through college. He quickly fell in love with the game and decided to make it a career. “Once I realized the positive impact I could have with athletes, both in soccer and life, I quickly realized that this was my purpose in life. My overall goal is to inspire kids to love them game.”

David enjoys reading leadership books, which he incorporates with his High School team. He believes its all about doing what’s right because it’s the right thing to do, which cultivates a strong team culture. He also likes to travel and experience new cultures. David doesn’t have a favorite professional team, but he is a huge fan of Coach Pep Guardiola who currently coaches Manchester City. 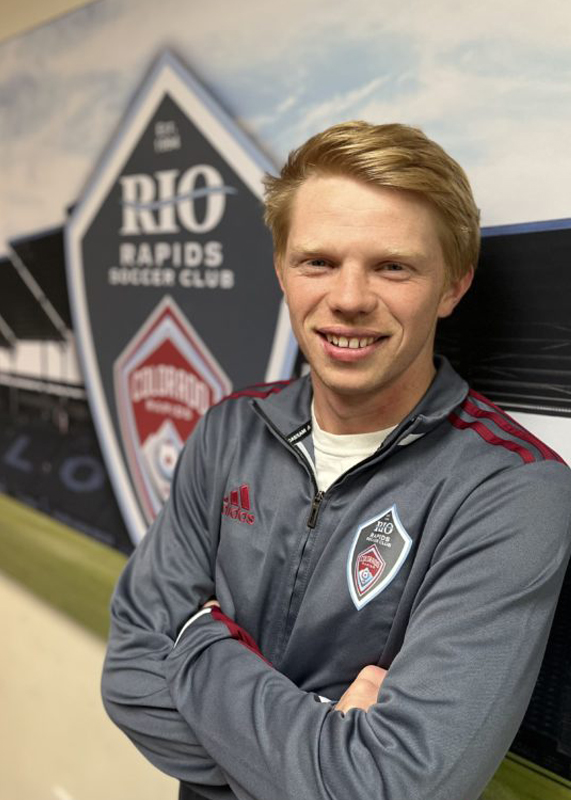 Jaxn Rogers is the U11-U15’s Girls Director of Coaching. Jaxn grew up in Albuquerque, NM before moving to Springfield, MO in 2009. After graduating in 2012, Jaxn attended Iowa Central. In 2014 Jaxn moved to Leeds, England where he was working towards his degree while playing for Richmond the American University in London (RIASA) and the U-23’s for Bradford City.

Jaxn received his B.S in International Sport Management, he began as an Assistant Coach for Evangel University for the Men’s and Women’s programs and worked as an Admissions Counselor for the University. While coaching college, Jaxn worked as Director of Girls Coaching (U11-U18) for Lady Demize. Jaxn also continued to play during this time with the Springfield Demize in the NPSL and PASL. Being a player-coach for both teams, Jaxn helped to lead the Demize to a National Title in Arena Soccer in 2020.

After getting married in March 2020, Jaxn moved to Tulsa, OK with his wife where he continued to play NPSL for the Tulsa Athletic earning a National Runner Up title in 2021. Jaxn also worked as a Personal Trainer in Tulsa, winning Personal Trainer of the Year 2 years in a row. Having moved back to Albuquerque in September 2021, Jaxn enjoys exploring the city he grew up in with his wife and 10 month old baby girl. 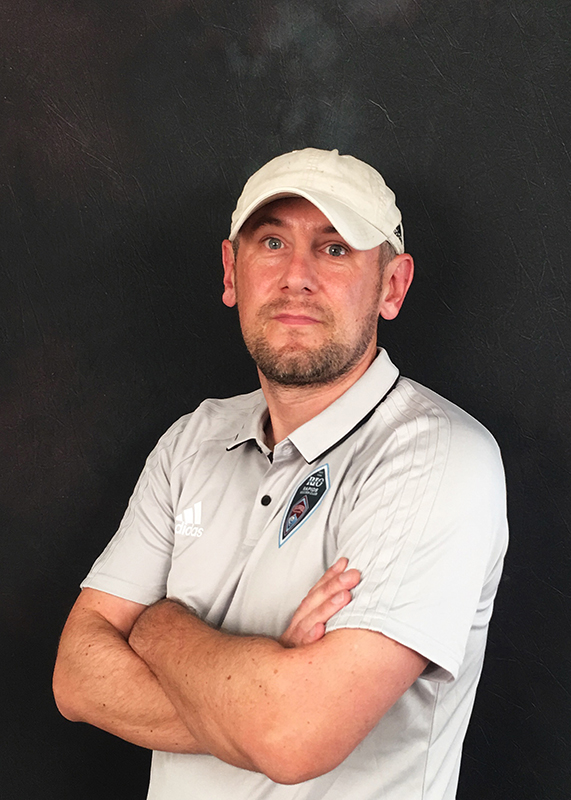 Chris works as the Director of Soccer Operations for the club and is also the U15-19 Girls Director of Coaching. In this role he oversees a lot of the day to day running of the club working with coaches, players and the board of directors. Chris also coaches girls teams for the club with his main focus being working with older players and their pursuit of college soccer opportunities.

Growing up in England Chris has been immersed in the game from a very young age. His playing career saw him play in college and also professionally in the Premier League of Wales before he retired due to injury. Chris moved permanently to the USA in 2000 after spending the previous three summers working camps all across the US for Challenger British Soccer Camps. He then oversaw the southwest region for Challenger Sports for a number of years before joining Rio permanently in 2004. 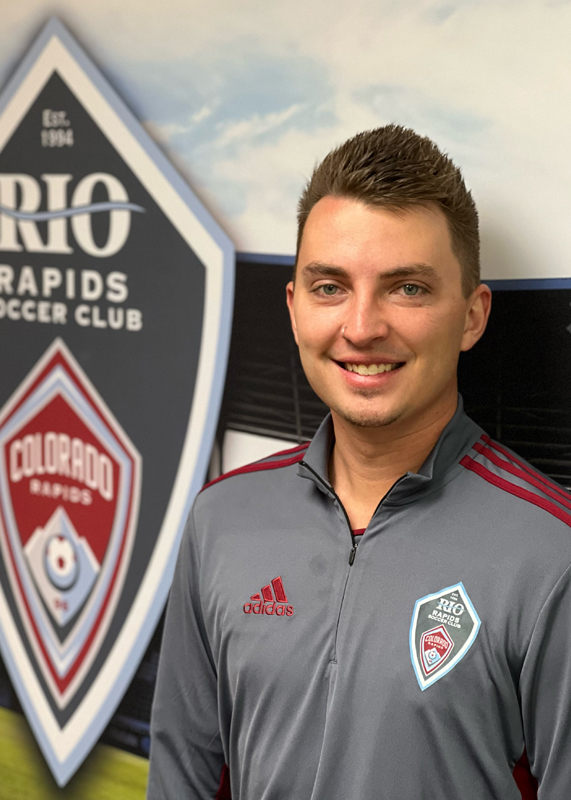 Aidan was born and raised in Albuquerque where he started his coaching career at 19 years old. Before coaching, Aidan was a Rio Alumni player, starting at the age of 6 and finishing as a senior in high school. As a player, Aidan also played as a three year lettermen at Eldorado High School from 2011-2014. Although he had opportunities to play college soccer outside of New Mexico, the opportunity to coach kept him in his hometown. In the fall of 2016, Aidan made his coaching debut as a head coach for Albuquerque United’s premier boys teams.  He also has valuable coaching experience with the Lil Kickers and the Skills Institute programs, where he coached for 12 seasons. Aidan joined Rio Rapids in the summer of 2019.

“Looking back as a player for Rio, I remember the friendships I made and the memories created as a player while playing for this club. Coming back into the same soccer club as a coach/director and being surrounded by the people who influenced me as a player, was a no-brainer. I’m extremely excited by the opportunity and even more excited to get started with the Youth Academy. I truly value the relationships you make with young and aspiring players, and I can’t wait to get on the field. Thank you to everyone involved for trusting and believing in me.”