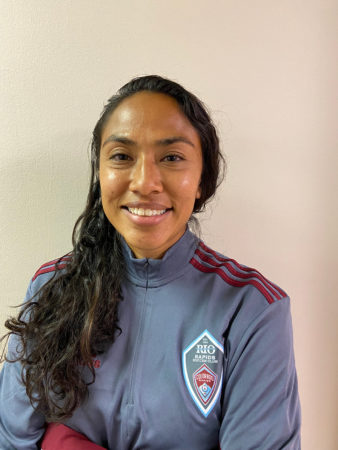 Elba is an Albuquerque native, and she played with Alameda Flash and won 7 state titles. Elba attended Valley High School and graduated from Albuquerque High School in 2009. She was on varsity cross country and played varsity soccer all 4 years of high school. She was the 2006 cross country state champion. She was recruited to UNM to run cross country but switched over to play UNM soccer the spring of 2010. She Played at UNM from 2010-2013 and Won 2 Mountain West Conference titles (2010-2011) and 1 Mountain West Tournament title (2010). Elba played semi pro for the Sacramento Storm in Sacramento, CA for one summer (2014). She has coached middle school boys for Bosque Middle School the fall of 2015 and has been an assistant girls coach at Albuquerque Academy for 5 years from 2016-2020 and won 3 state titles 2016-2018 during that time.

Elba Holguin on her new position: “I’m excited for the next step in my journey with RRSC. I’m very much a student of the game and RRSC has given me the chance to continue growing and learning with them, while having a larger net to cast in order to help more players learn valuable life lessons through the beautiful game of soccer.”

Rio Rapids Director of Coaching Chris Hurst States: “We are delighted to have Elba joining our Director group.  We are excited to not only be adding another female role model to our Director group, but a fresh set of ideas and a different perspective to help the continued growth of our club.”

Join us in congratulating Elba Holguin on her new position with Rio Rapids Soccer Club.