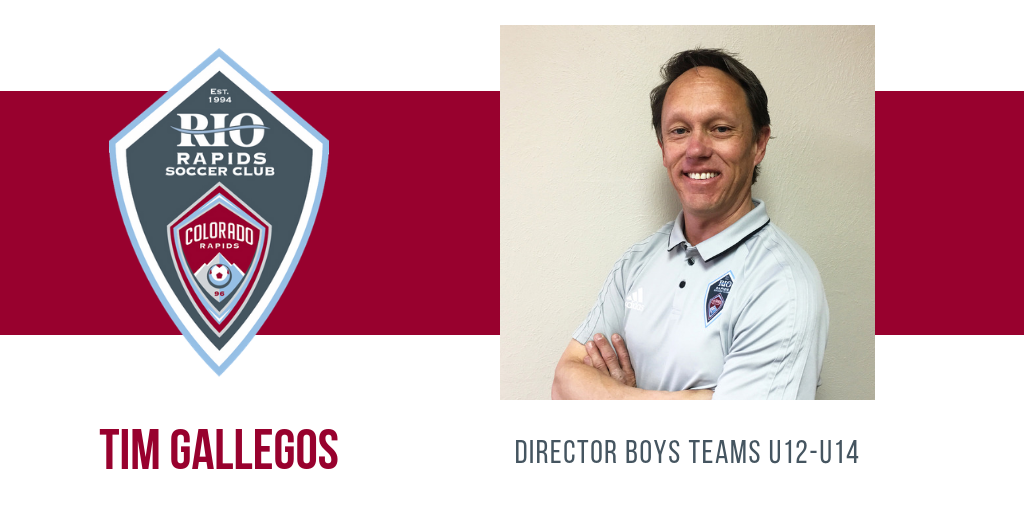 Tim was born and raised right here in Albuquerque, and has been in and around the game of soccer for over 40 years as a player, as a coach, as a parent, and definitely as a fan. As a player Tim started playing AYSO at the age of 5. At age 13 he traveled with his AYSO All-Star Team to Birmingham England to play in the West Bromwich Albion Cup. Upon his return, Tim then joined the Sierra Vista Strikers ’68. He played the rest of his club years with Sierra Vista Football Club, a club that helped form the basis of the Rio Rapids SC we know today. In 1985 Tim participated in the NM ODP program, and through ODP was selected to the US U17 National Team. He played for the United States for two years earning 19 international caps as a starter at right wing. In the spring of 1987 Tim and the US U17’s finished as runners-up in the CONCACAF Tournament which earned them a berth in the 1987 FIFA U17 World Cup. After beating Ecuador in the first match, the US was not able to exit the group stage. Despite an early tournament exit, playing in a FIFA World Cup was a major highlight in Tim’s playing career. Tim played high school soccer for Albuquerque Academy and was a four-year First Team All-District and All-State selection, two-time Parade All American, and two-time Gatorade Player of the Year. Tim went on to play college soccer at UCLA where he and his fellow Bruins won the NCAA National Championship in 1990. Tim began coaching his college coach’s son’s club team during his last two years in Los Angeles.

After graduating from UCLA with a degree in Sociology, Tim returned to Albuquerque in 1992 where he began to run soccer clinics for local club teams. He also helped coach his younger brother’s club team full time. In 2005 Tim volunteered to coach his daughter’s first AYSO team before moving to Rio in 2006 where Tim has coached ever since. Tim became heavily involved in US Soccer’s coach education curriculum in 2013 earning his D license. In 2014 he earned his C before earning his B in 2015. In 2017 Tim completed the six month curriculum to earn his USSF A Youth License. His experience in the A Youth course has transformed his perspective on teaching the game of soccer to young players, and it has set him on a perpetual path of learning and self-development as a coach.

Tim has a wife named Heather, and two children who currently play in the club: Hannah plays for the 00 Girls, and Dane plays for the 05 Boys. In addition to coaching club, Tim has coached in the NM ODP program for the last three years, and was a staff coach with the 99 Girls Region IV Regional Team in 2016. When not watching, studying, coaching, or playing soccer Tim enjoys playing the guitar, skiing, mountain biking, and cooking.

Q:  What drew you to become a part of  Rio Rapids originally?

A:  My daughter started playing AYSO at age 4, and I was the coach of that team – The Diamonds! After that season Keith Rivera was putting a team together to join Rio, and he asked us to come over which we did. Keith and I coached that team together. We were called The Thunderbirds. That was in 2005/6 and I have been a Rio coach ever since!

Q:  What is your favorite part about Rio Rapids SC ?

A:  As a parent with kids currently in the club, I really appreciate all of the opportunity and support the club provides for the kids in the club at all levels. From the standpoint of a director, I am very excited about the work we are doing to implement curriculum, coach development, and a true club culture.

Q:   What is your role at Rio Rapids?

A:  First concert was Van Halen in 1984. The last one was Ozzy this past September!!

Q:  Any favorite line from a movie?

A:  Pretty much any line from Fletch, Caddyshack, or Fast Times At Ridgemont High

Q:  Best vacation you’ve been to?

A:  My family and I love to go to Europe. England is nice, but Spain, Italy, and Germany are my favorites (Sorry to all my British mates with whom I work!)

Q:  Do you have a favorite quote?

A:  Growing up my dad always used to say “Your attitude is your altitude”. He still says it to this day! I try to live by that quote every day.

Q:  What do you like most about your job?

A:  By far the thing I love the most about this job is being on the field with the players. Whether it is for training or for a match, I just love being out there. It reminds me of the times when I was a player.

Q:  What is the most important thing you have learned in the last five years?

A:  Wow, that’s almost impossible to answer but the first thing that comes to mind is The Growth Mindset. The difference between a fixed mindset and a growth mindset is amazing when you look at it. I think looking at the world with a growth mindset automatically gives you a positive view of things. It has been extremely helpful to me as a coach, and it is something I talk to my players about quite a bit as well.