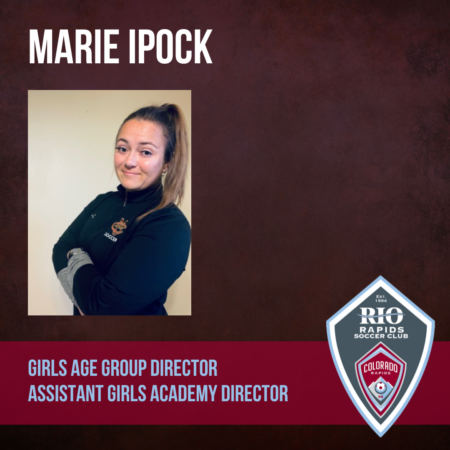 We are thrilled to announce that Marie Ipock will be joining our director group beginning in the new year. Marie will be an Age Group Director as well as the Assistant Girls Academy Director. Before returning to New Mexico, Marie was the assistant coach at Colorado Mesa University from January 2021 to November 2022. While part of the Maverick staff, she coached a conference championship winning team in the Fall of 2021. She coached multiple players with accolades including the Conference Player of the Year (2021 & 2022), Defensive Player of the Year (2021), Freshman Player of the Year (2021) and Academic Player of the Year (2021 & 2022). Previously, Marie served as the first assistant for the women’s soccer team at Alabama State University (2019-2021) and before that was the assistant at Johnson & Wales University – Denver (2017-2019). Between the three college programs, Marie has coached at DI, DII, DIII and NAIA. In 2020, Marie was named to the United Soccer Coaches 30 under 30 program as one of the top young coaches in the nation. Licensed by the USSF Class Level “C” License, she also obtained her United Soccer Coaches Diversity and Inclusion Diploma and United Soccer Coaches Goalkeepers License – Level 1. Her coaching experience also involves being part of club programs in Colorado and Alabama. As a player, Marie is a Rio Rapids alum, having played for Xtreme 93 Girls. After club soccer, Marie suited up for Metropolitan State University of Denver from 2011-2014. In her time with the Roadrunners, she earned all-conference honors, and was a key factor in boosting the team to four NCAA Tournament Appearances, including two Sweet 16 berths. She was also a member of the Colorado Rapids women’s national championship team during the summer of 2013. A graduate of Metropolitan State University of Denver, she earned her bachelor’s degree in human performance and sport. She earned her master’s degree in history from Alabama State University in the summer of 2022.

“We are delighted that Marie has decided to return to New Mexico, to further her coaching career”, said Chris Hurst, Rio Rapids SC Director of Coaching, and Marie’s former club coach. “Marie has been through the college recruiting process both as a player, and as a coach at multiple levels. The experience she brings in that regard, is going to be huge for our female athletes. Being a former Rio player, just adds another dimension to what she can offer to our players, as she knows what it takes to be a successful player coming out of NM”

“I’m incredibly excited and honored to be joining the Rio Rapids staff” said Marie. “The club game has always held such a special place in my heart and to be back in it while also being able to coach in my home state is an opportunity I could not pass up. I look forward to helping Rio Rapids continue to develop top female players that compete against some of the best teams in the nation. I had such a great experience with the club so having the chance to pass that along to younger players is the best way I can give back.”