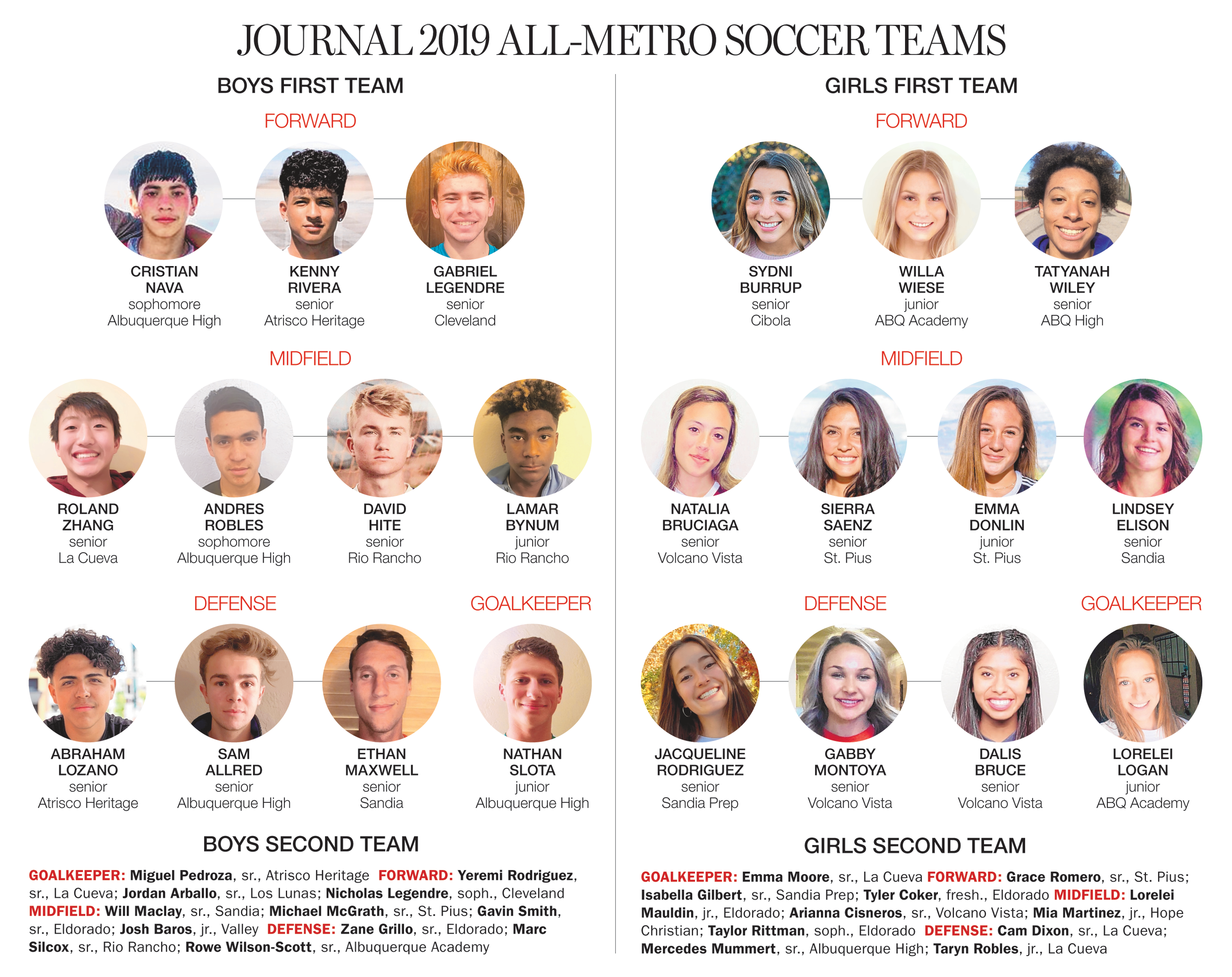 A big CONGRATULATIONS  to our Rio Players who made All Metro –  A GREAT representation for Rio Rapids and New Mexico – You make us very PROUD!

The Journal’s All-Metro soccer teams, which we are announcing here, are unlike the All-Metro listings from any other sport.

We see this come to fruition on the annual signing day, when more metro athletes go Division I in soccer than any sport.

All of which makes choosing our All-Metro teams both a pleasure and a nightmare. Forthwith, here are our selections from the 2019 season. Not everyone who deserves to be here is here, I’m sorry to say, but this remains a tremendous representation of the quality of local talent.

We begin with two All-Americans: Gabby Montoya from Volcano Vista and Cristian Nava from Albuquerque High, who were honored as such recently by the United Soccer Coaches. Montoya fulfilled multiple duties during the Hawks’ championship season. Nava? It would be hard to quantify just how admired this young man’s talent is among fellow coaches. And he’s a sophomore.

Nava, barely 5 feet tall, is well on his way to becoming one of the most electrifying soccer players this city has ever produced.

Nava, who scored 30 goals, is one of our boys’ three first-team forwards, along with Atrisco Heritage’s terrific Kenny Rivera (22 goals) and Cleveland’s goal machine, Gabriel Legendre (30).

Class 5A state champion Albuquerque High has four of the 11 first-team choices, which seems fitting given that the Bulldogs finished the season undefeated and ranked No. 7 in the country by USA Today.

Another AHS 10th-grader, Andres Robles, is one of the midfielders. The Bulldogs also put goalkeeper Nathan Slota and defender Sam Allred on the first team.

The midfield also features David Hite and Lamar Bynum from Rio Rancho, plus La Cueva’s Roland Zhang. Big Ethan Maxwell from Sandia is the third member of the back line.

There is Division I talent up and down the girls’ list of first-teamers (and there are several future D-1 players on the second team, too). Bruce and Bruciaga have signed with UNM. Cibola forward Sydni Burrup signed with Gonzaga. Sandia Prep defender Jacqueline Rodriguez signed with New Mexico State. Lorelei Logan, the first-team goalkeeper from Albuquerque Academy and a junior, has committed to Memphis.

Burrup, Academy’s Willa Wiese, who led Class 4A in goals, and Albuquerque High’s Tatyanah Wiley are the first-team forwards.

Bruciaga is joined in the midfield by Lindsey Elison of Sandia and a talented duo from St. Pius, Emma Donlin and Sierra Saenz.

My congratulations to all 44 players recognized this year. The second-team selections accompany this column. I never know if I’ve arranged them in the right order, and I agonize over it every single year, but I always know this: all of them are deserving, and it’s a marvelous collection of talent.