The 98G/U17, 99G/U16 and 00G/U15 teams had tremendous success at tournaments in the San Diego area over Thanksgiving weekend compiling an overall record of 9 wins, 2 losses and a tie. The 00G finished in 2nd place at the Surf Thanksgiving Tournament with a 5-1 record. The 99G won their group at the November Nights Showcase. The 98G went undefeated at the prestigious Surf College Cup with a record of 2-0-1.

Rio Rapids girls teams also had an awesome Thanksgiving weekend in Phoenix at the Chelsea Cup: 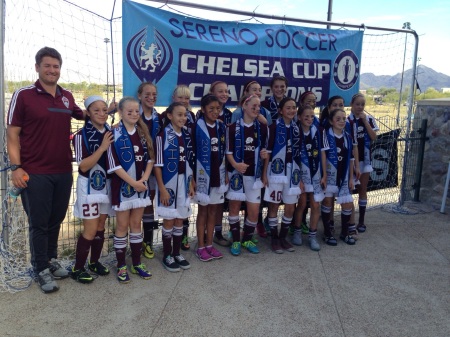 U13 Regulators won the Adidas Bracket. U11 Galacticas, U12 Crossfire, U13 Barcelona and U15 Arsenal all took 2nd place in their divisions and Rio Rapids 02G also reached the semi final of the U13 Chelsea division.