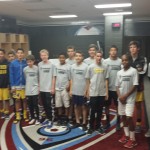 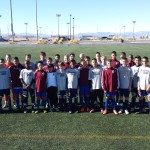 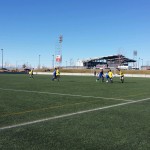 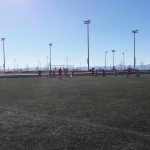 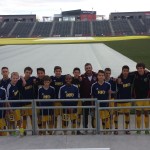 November 16th & 17th 15 boys from Rio Rapids SC were the first from the club to be given the opportunity to travel to Denver to play two friendlies versus Academy opposition.

The weekend started with the CO Rapids meeting the boys at Dicks Sporting Goods park and making sure their pre game practice went off without a hitch. The Rio Rapids players were then taken on a tour of the CO Rapids facilities and the Stadium by Brian Crookham (Director of Operations for the CO Rapids Youth Academy).

The players got a behind the scenes look at how the Rapids tick throughout the season. The boys saw the media areas, as well as the visitors and Rapids locker rooms. The players and parents also got the chance to have have questions answered by Brian about the partnership the two clubs share.

It was then time for the first of two games. The Rio Rapids played the Real Colorado 14 Development Academy (DA). The game was played under the lights and was a very fast paced game. The Rio Rapids are the current state champions in NM, but soon realized this was a completely different level. The score was 1-1 at half time, and a very competitive game.

The second half saw the Rio Rapids concede 4 goals with no reply, but came away from the game with some very valuable lessons. Lesson they could put into practice the very next day.

The second day was all about the game V the Colorado Rapids 14DA. This team was far more technical than the team the previous day, but the Rio Rapids had learnt something from the day before. The game was back and forth all first half with many chances for both sides. The score was 0-0 at half time. The second half was much the same. The main difference between a DA team and the Rio Rapids team was their ability to convert chances. The final score was 0-3 to CO Rapids.

The weekend was a great experience for all the players and families who travelled with the team. We look forward to many more opportunities like this as the partnership grows over the years.