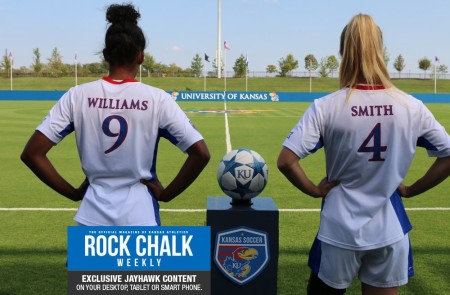 2 former Rio 94G Eagles players who are playing together at Kansas in the Big XII.

The transition from high school to an out-of-state college can be challenging for some students, but for two Kansas soccer players, no such problem existed.

Kaley Smith and Ashley Williams both grew up in Albuquerque, New Mexico. They first crossed paths in fourth grade when they played on the same team: the Classic Lasers. Eventually, the women reconnected when they both played for the Rio Vista Eagles club team, Smith for six years and Williams for seven.

“We’ve known each other since we were eight or nine,” said Williams. “We lived on opposite sides of town in Albuquerque, but we played on the same club team. She [Smith] is more like a sister to me instead of a friend because I’ve known her since we were little.”

Smith attended Eldorado High School, where she was a four-time all-state honoree and helped the Eagles to a state championship in 2009. Meanwhile, Williams played for Volcano Vista High School and was named the New Mexico State Player of the Year as a senior in 2011 after leading her team to a runner-up finish at the state championship.