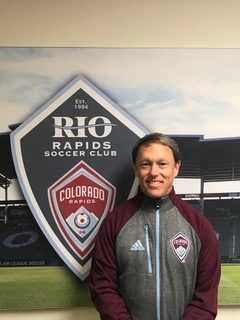 We are pleased to announce the hiring of Tim Gallegos as the new U13-U14 Boys Director. Tim was born and raised right here in Albuquerque, and has been in and around the game of soccer for over 40 years as a player, coach, parent, and definitely as a fan.

Tim joined the Sierra Vista Strikers ’68 at U14, and he played the rest of his club years with Sierra Vista Football Club, a club that (along with Rio Grande FC) eventually became Rio Rapids SC. Tim has been part of the U17 National team where he earned 17 caps and played collegiately at UCLA and won the 1990 NCAA National Championship.

Tim holds a B. S. in Sociology from UCLA and recently was awarded the new USSF Youth “A” License.

“I really believe that we have talented soccer players in our state who have the desire and the raw ability to go as far as they can in the sport of soccer. For some that means playing in college, and for others that means playing pro. Either way, I am excited to work with fellow coaches within our club to develop ideas and curricula that will develop players at all levels, inspire players to want to improve themselves, and get more players where they want to go in the sport of soccer”.

Boys U9-U12 Director Sibby Browne states “Coach Gallegos brings a unique perspective to his new role with the club. Not only has he grown up in the New Mexico soccer culture, he’s been a coach, a father, and a board member in Rio Rapids SC. As a youth player, he competed at the highest levels. That experience, coupled with his never-ending drive to grow as a coach, will serve the club and its players well over the coming years”.

Chris Hurst who has been the U13-U14 Boys Director will now be overseeing the U15-U19 Boys.